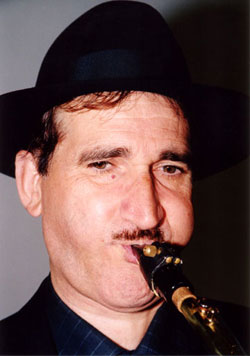 Brian Sukovez was born in a music family. His father has been playing violin, mandolin and clarinet, and brother has been playing violin, mandolin, clarinet and saxophone. Since his childhood Brian was learning to play violin and piano. Later he was learning to play clarinet, saxophone and guitar. He has been attending music schools in Mostar, Osijek and Dubrovnik, and later the jazz school in Graz.

Brian Sukovez has been on the music scene for forty years. He started as clarinet player in a brass-band and in his early years he already showed an interest in jazz. In the 70's he was playing in many pop-groups and on different instruments: sax, clarinet, el. guitar and bass.

During the 80's he gained some international experience. He played in Switzerland and Germany like many other musicians from his generation.

In the begining of the 90's he played for some time in the big band for RTV Sarajevo (radio and television), and after that he went to Austria (Graz) where he spent 14 years. During that time many audio-recordings emerged, and were published on 7 CDs.

Those were the most productive years, when Brian conducted different jazz-groups, and even a big band twice. He was also well known as one of the street musicians in Graz.

Since 2005, Brian has played mostly in the Dubrovnik area. In 2007 he organized the Porporela jazz-fest attended by many Croatian and international musicians, and his big band "Swing Riders".